New St. Louis Billikens men’s basketball coach Travis Ford joined The Ryan Kelley Morning After on Friday to talk about his new job, the city of St. Louis and what his plans are for the program.

Read some excerpts and listen to the full interview below:

Why do you think SLU is such a good fit for you?

“I’m passionate about the game of basketball first off. When you look at St. Louis University basketball and the campus and the community and the facilities, I don’t think there’s any question it should be among the names of the Villanovas and the Xaviers and playing at that level.”

“We’ve got a lot of things that we we can bring in some of the top recruits around the country and keep the best players from Kansas City, St. Louis and the surrounding area at home. All those things are going to be very very important to me.”

“There’s so much potential, we just have to hit the ground running, beat every bush. We want to pack the Chaifetz Arena every night. It’s important for us to get the recruits and things we need to get the support that I know that’s there.”

Do you look for a certain type of player when recruiting?

“When you have recruits, it’s all about needs. But I like guys that have a good feel for the game of basketball. Some coaches love athletes…I love athletes, but I love guys that understand the game…have a good IQ of the game. Those are the guys who tend to pick up your system quicker.” 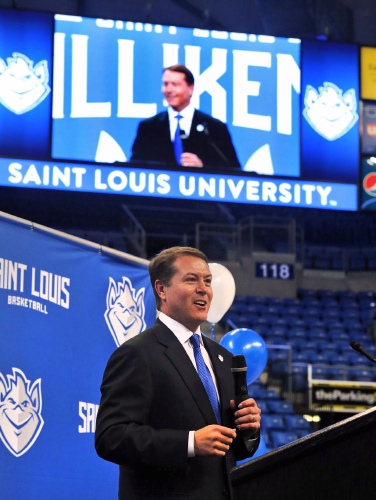 On developing consistency in the program:

“It’s just going to take time to evaluate…I’ve learned you don’t just come in to rush to sign players, rush to put a staff together…I’m going to be patient. This is a process. We’re going to get the right players, and the right coaches in here. We’re going to build this to be a consistent (program). St. Louis University has a lot of history. They’ve had a lot of great players and coaches throughout different times in the school’s history. But what we want to do is develop consistency of being a top 25 program. And that’s a process.”

You played for a year at the University of Missouri when you were a freshman in college. What did you learn from Norm Stewart?

“I learned so much about toughness and the game of basketball. I’ve taken so much from so many coaches. I took a lot from Coach (Norm Stewart). I don’t think he knows…how much I still look up to him. I’ve never wavered from how much I enjoyed that year at the University of Missouri.”

You said yesterday you’re friends with Cardinals outfielder Matt Holliday. What did he tell you about St. Louis?

“He loves St. Louis. I’ve talked to him about the city and different places to possibly love. He’s so many people I’ve leaned on. Him and his wife have just been a huge help in talking about different schools. A couple of our kids are the same age. I’ll be at the ballpark quite a bit. As far as making me feel good about different areas of St. Louis and different churches and things like that. I look forward to hanging out with him and his wife.”